Reasons Why the Philippines is a Top Outsourcing Destination

There was a lot of business processing outsourcing in the country in the middle of the 1990s. It spread quickly. Today, even though there is a health crisis in the Philippines, outsourcing from the country still dominates the economy. There are a lot of good reasons why this growth has been going on for so long.

VA FLIX, one of the top providers of business process outsourcing in the Philippines, talks about some of the reasons why the Philippines is a good place to outsource.

1. Labor costs that aren’t too high

Cost savings are the most important reason to outsource to the Philippines. As a result, businesses in countries like USA and UK can save a lot when they hire offshore staff in the Philippines instead of hiring full-time or part-time employees in their own country. This is because the Philippines is a cheap place to work. From the start, a business can save up to 80% on overhead costs.

In this case, we aren’t just talking about low-cost or cheap labor. There are a lot of ways to be more efficient with money. For example, you can get better work for less money. It’s not cheap to outsource to the Philippines, but rather, it’s a smart business move.

2. Filipinos are able to change their minds.

In general, Filipinos are hardy and adaptable. People from the Philippines are very good at changing shifts, so they can work during work hours in different time zones. Besides that, they are also very adaptable, which means that they can learn new things very quickly and easily.

The Philippines outsourcing workforce is trained to work around the clock. This is good for businesses on any side of the world, too. They make sure that their workers get paid well already, but if they work the graveyard shift, they will get even more money. The Philippines is a great place to outsource work because there aren’t any time zones that make it hard to get things done.

5. The cultural match and compatibility between the two people is also important in this case

It doesn’t matter how cheap it is to hire an offshore worker somewhere else. In the Philippines, you can only find cheap workers who also work well with your work culture. People from Western and English-speaking countries find it easier to get along with their Filipino workers because Western culture is deeply ingrained in the country.

VA FLIX Talent Resources is a place where you can find the best people to work for you in the Philippines.

VA FLIX is an example of why the Philippines is a popular place to outsource. The company is a trusted business in the country. Get in touch with us today and set up a time to talk about how we can help you become even more successful and how we changed the culture of a typical BPO.

Thinking of Hiring a Virtual Assistant? What Is The Average Rate For A Virtual Assistant? A Guide To Recruiting And Managing Virtual Assistants What Is The Best Way To Find A Virtual Assistant? 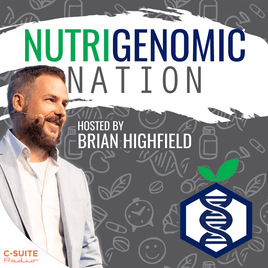 On the Nutrigenomic Nation Podcast with Brian Highfield, health professionals talk secrets about nutrition and science based wellness techniques rooted inside your DNA. They share ways to live a natural life and the life-changing affects good nutrition can have, and the amazing results you can get by making simple changes to your daily routine.Host Brian Highfield is a nutritionist, author, speaker, and founder of many successful health companies. He educates other healthcare professionals in improving their life and their health through novel breakthroughs in the health and wellness industry. 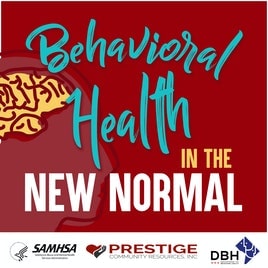 Here Are Just A Few Shows We Produce

Behavioral In The New Normal, a podcast developed by Prestige Community Resources, addresses the crisis our community has experienced during COVID-19. Paul Wells Sr. has over 30 years of extensive clinical social work experience. Each week he conducts insightful interviews with expert guests to discuss the concerns of the Washington D.C. community. The podcast will cover topics ranging from , financial hardship, and local government to small businesses and organizations, and education and homeschooling.

The Inside Story on Franchising

For any entrepreneur or business owner, one of the most common questions that comes up is “Where do I go from here?” The answer that could change your life is “franchise”. The Inside Story on Franchising podcast is the one-stop shop for how to find the best franchising opportunities for any entrepreneur looking to expand or even to sell.  Hosted by Ricardo Matos, a business management and growth consultant with over 25 years of experience, expert guests will share their stories and secrets about how they used franchising to create multiple streams of income for a more successful and happy life. Through these shared experiences, individuals and businesses will get the information they need to make the best decision for their growth opportunities. 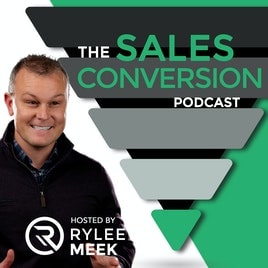 The Sales Conversion Podcast with Rylee Meek introduces listeners to the creator of the Social Dynamic Selling System, and how to turn cold calls into hot leads. Rylee Meek has developed many multi-million-dollar businesses for himself and has coached other business owners and salespeople how to do the same. On the show, Rylee shares his own expertise as a business building guru to expand your business, grow your income, and improve your life.Guests on The Sales Conversion Podcast include experts in their field who have succeeded in business and sales, and can share their secrets so you can do it too. Tune in each week for a dynamic conversation about tried, tested, and fine-tuned ways to grow your business and create a scale-able selling system. 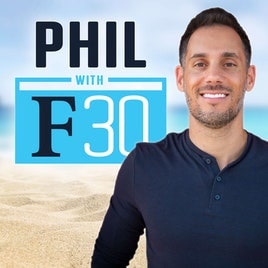 Welcome to the Podcast where Phil interviews Forbes 30, hosted by Phil Michaels, Forbes 30 Under 30 Entrepreneur and Performance Coach!Every year, Forbes names the top 30 young Entrepreneurs, Leaders, and Stars in the world, and each week Phil gets one of them to share their story, to help you level up in your life and business!F 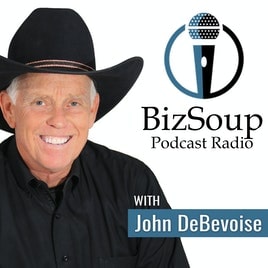 BizSoup Podcast Radio brings to the podcast world an original style of compelling interviews of some of the brightest entrepreneurial minds in the business. Speaking on a variety of industry topics, Mr. DeBevoise uses his vast business and broadcast experience to delve deep into his guest’s successes and failures. He touches on each one’s journey that’s filled with personal struggles and hardship, yet shows their perseverance, drive, and determination that ultimately makes them hugely successful. Focusing on the aspiring small business owner, John talks about all things business and in every episode reveals his “Tip’s, Tools and Techniques” to owners grow, sustain, and reach their highest potential possible. BizSoup is geared for new and aspiring business owners but even the most seasoned business veterans will find his podcast both enlightening, educational, and entertaining.

Grow Your Business and Grow Your Wealth 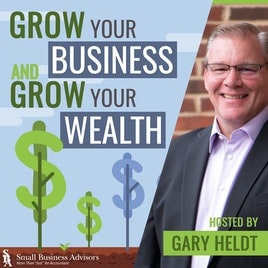 Grow Your Business and Grow Your Wealth

The Grow Your Business and Grow Your Wealth Podcast with Gary Heldt is the go-to place to help plan for your future. Whether you’re a business owner looking to maximize your tax profit, a parent planning for college, or an individual looking to improve your life, Gary is the expert for you.Guests on the podcast will chat with Gary and share their secrets to build a better financial foundation for your business and your life. Tune in for informative conversation about keeping your finances organized and not wasting your well-earned money. 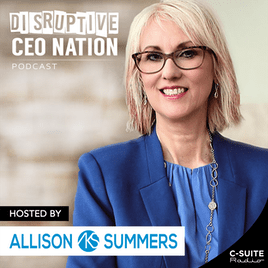 EXECUTIVE COACH + GLOBAL BUSINESS LEADER ADVISOR. SPEAKER. AUTHOR. GUIDING SMART PEOPLE TO GROW INFLUENCE & CREATE OPPORTUNITIES Over 30 years, I have had the opportunity to work with fantastic organizations, impressive individuals and key industry leaders across six continents. Sitting in the corner office in both corporate and non-profit environments, I’ve attained, delivered and coached success in both the C-Suite and international board rooms. My diverse experience has provided cross-cultural insights into the talents, skills and measures required by individuals not only to get to the top, but to THRIVE at the pinnacle of business… And now I am happy to share that knowledge and support you in your quest for influence, empowerment, and ultimately success. 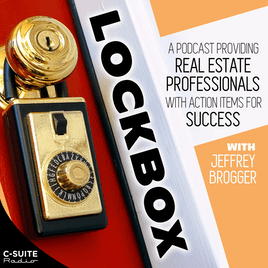 The Lockbox Podcast with Jeffrey Brogger introduces listeners to the founder of STEEZY.Digital and how to empower real estate professionals with technology. Jeffrey has coached many clients on growing their businesses and looks to get insight to his listeners from the mountains of info his guests will provide. On the show, Jeffrey shares his own expertise as a marketing guru and expanding your real estate business using technology. Guests on The Lockbox Podcast include experts in their field who have succeeded in real estate and technology, and can share their secrets so you can do it too. Tune in each week for a dynamic conversation about tried, tested, and fine-tuned ways to grow your business. 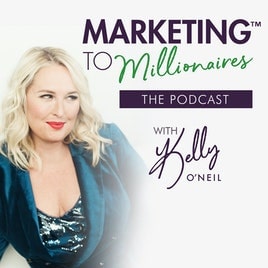 Kelly O’Neil is on a mission to help small businesses and entrepreneurs recession proof their business and catapult their profits by teaching them the insider secrets to mastering the art of Marketing to Millionaires ™. Each week, join the internationally recognized expert in marketing to affluent clientele as she shares her behind the scenes insights, strategic tips and market disrupting information on how to find, engage, sell and impress your high-end clientele. Kelly will also share candid interviews with millionaires, billionaires, celebrities and the most brilliant business minds in the world who are serving these clients. 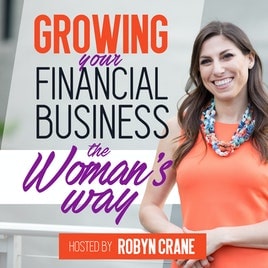 The Growing Your Financial Business…The Woman’s Way Podcast is hosted by Robyn Crane, CFP®, Speaker/Trainer, 7-Figure Entrepreneur and 4X #1 Best Selling Author. Robyn interviews female financial advisors, industry influencers and highly successful entrepreneurs to give listeners innovative strategies to grow their ideal businesses so they can live their ideal lives. Robyn’s mission is to increase the footprint of women in financial services by helping female financial advisors and insurance professionals become so successful, they never leave the industry. 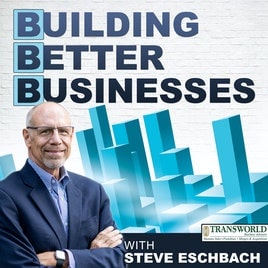 The Building Better Businesses Podcast is the best place to learn how to take your business to the next level, because it’s no longer enough to earn good profits. Hosted by Steve Eschbach, an expert on business and business people, he’ll tell you why building a network of connections and using all types of to your advantage will put you over the edge.Steve and his expert guests will delve into the many facets of owning the business and how to become a good, caring business owner. Tune in to learn how making a difference in your community can attract all sorts of clientele, which will in turn build you a better business. 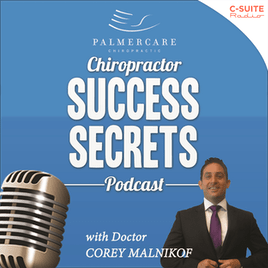 Chiropractor Success Secrets Podcast with Doctor Corey Manikof, founder of the Palmercare Group. Dr. Corey Malnikof is a Chiropractor who went from having his debit card being declined for a $4 sandwich to owning multiple multi-million dollar practices. He is an author, speaker and nationally recognized chiropractic success expert. To learn how to transform you practice and your life with Doctor Corey’s Leadership experience, simply register at www.CoreyMalnikof.net or go to Palmercaregroup.com. On the podcast, Doctor Corey brings together some of the most cutting-edge successful chiropractors in the world to share with you how they grow their practices and how you can, too.